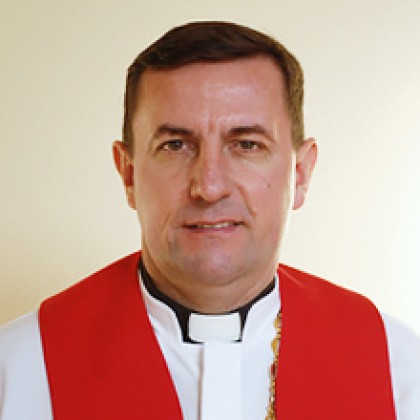 Bishop of the Ukrainian Lutheran Church

Lutheran communities in Ukraine existed from the time of the Reformation. They were numerous in Galicia, Pobuzhya, Volyn’, Podil, the Bratslavshchina and Kyiv. Formally, the Ukrainian Lutheranism as a separate ecclesiastical community was organized in 1925 in Galicia and Volyn’ territories.

Since the invasion of Soviet troops at the Western part of Ukraine, the repressions began against Lutherans. After World War II the institutional life of the Church in Ukraine completely stopped and continued only in Western Europe, the USA and Canada, where many believers could emigrate.

The Church Revival in Ukraine began in 1993. Today ULC consists of 26 religious organizations, including 21 registered communities, 4 missions, and a theological seminary.

The Church has five religious buildings, one of which the state has returned to the ULC. In the Church, there are 17 pastors with theological education. ULC has developed charitable and diaconal ministry and has acted as a co-founder of the International Charity Fund "Gift of Life".