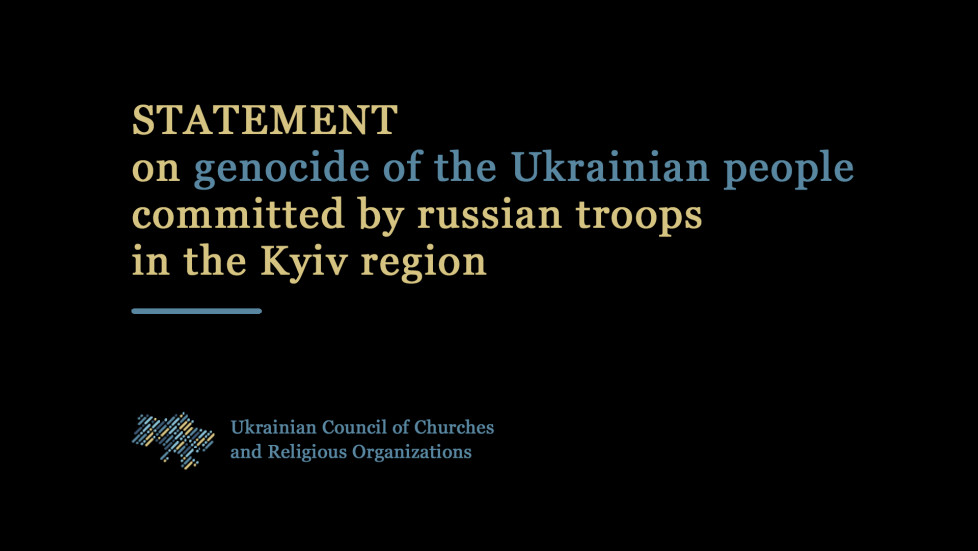 regarding the facts of the genocide of the Ukrainian people,

committed by russian troops in the Kyiv region

Entire Ukraine and the whole world were horrified by the numerous facts of cruelty and inhuman brutality that russian soldiers committed against innocent civilians in the captured cities of the Kyiv region. The month of temporary occupation of Bucha, Irpin, Hostomel, and surrounding villages by the russian troops led not only to the large-scale destruction of beautiful newly built residential areas, playgrounds, hospitals, and other social infrastructure but also to the total destruction of the civilian population of the region.

In recent days, in Bucha, liberated from russian invaders, 15 people were found shot in the head with their hands tied on one of the streets alone. There is evidence of russian soldiers tormenting Ukrainian women and even children who, after collective rapes, including in front of their relatives, were shot and abandoned in mass graves or just on the streets. Hundreds and possibly even thousands, of innocent Ukrainians, were tortured and killed in a few weeks of russian occupation.

Such a terrible, bloody trail of the russian occupiers on the Ukrainian land, as well as the support of their humanity-hating actions by their mothers, wives, and the general public in russia, is evidence of a complete distortion of the worldview and moral degradation of the russian society. The war crimes and crimes against humanity committed in Ukraine are a convincing argument in favor of comprehensive and non-exclusive sanctions against the russian economy in all its sectors, and should finally encourage world leaders, NATO, and the EU to provide Ukraine with all the necessary weaponry to defeat russia as a terrorist state, including air defense systems, fighter jets, lethal offensive weapons, tanks, and anti-ship missiles.

The whole world should realize that this is not a “Ukrainian crisis”, it is not even a “war of russia against Ukraine” – it is a war of humanity, moral values, virtue with concentrated evil that has a satanic fascist nature. The cult of war and chauvinism have been celebrated in russian society for decades – they began to worship the war, built a temple dedicated to it in Moscow, and with the slogan "We can repeat it" justifies new sacrifices to its bloody idol.

We offer prayers for the eternal peace of all innocent residents of Ukraine who were killed in the Kyiv, Chernihiv, and Sumy regions, in Kharkiv, Mariupol, Kherson, Melitopol, Berdyansk, and other cities where the russian invaders encroached. We pray for the complete victory of Ukraine over this evil, for the defeat of the russian occupation forces, the overthrow of the humanity-hating regime in russia, and the eye-opening and repentance of russian citizens blinded by propaganda.