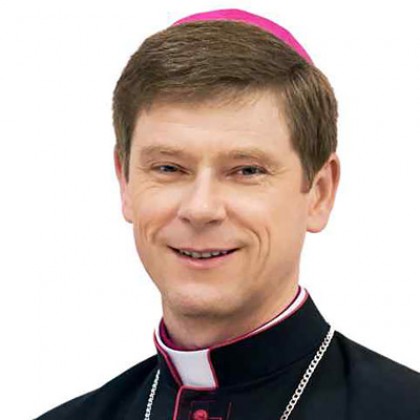 Bishop of the Roman Catholic Church in Ukraine, Ordinary of Kyiv-Zhytomyr

The Catholic Church of the Latin Rite has been officially present in the territory of modern Ukraine since the X century, that is, since the times of Kievan Rus. The bishops were already present here at that time.

The first episcopal see was located precisely in Kyiv (in the ХІ/ХІV centuries). The Metropolitanate of Halych was established in 1375 (in the XV century the episcopal cathedra from Halych was transferred to Lviv). Subsequently, the dioceses of Lutsk, Kamianets-Podilskyi and Zhytomyr were established.

The Soviet authorities completely eliminated the Roman Catholic institutions in Ukraine. Small groups of Catholics, some enclaves survived the period of atheism.

On January 16, 1991, Pope John Paul II restored the structures of the Catholic Church in Ukraine, and on February 8, 1992, diplomatic relations were established between the Holy See and Ukraine.

The Roman Catholic Church in Ukraine has about 1000 parishes and missions, more than 200 monasteries, 5 Higher Theological Seminaries, 3 Institutes of Theological Sciences, 4 general education schools and a number of charitable organizations.